Microsoft has announced that language interpretation is now Generally Available (GA) for Microsoft Teams Meetings! This feature was built to support customers and users who need to communicate in the virtual world across languages.

The language interpretation feature allows professional interpreters to convert the speaker’s message into another language without disrupting the speaker’s original flow or delivery. This simultaneous interpretation will lead to more inclusive meetings, where participants who speak different languages can fully collaborate with each other.

Language interpretation will allow users to:

Interpreters can start interpreting immediately after joining a meeting.

When participants join a meeting with language interpretation enabled, they can select a language channel to listen to during the meeting. They should then be able to hear the interpreter’s translation at a louder volume than the main speaker.

You can read more about this feature here 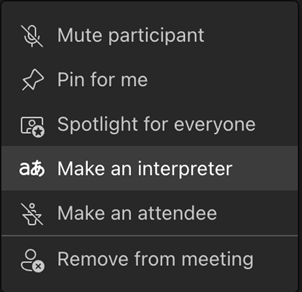 In-meeting roster promotion of a participant to an interpreter

Attendee selection of language channel to listen to

Microsoft says today’s announcement is another effort in their journey to break communication and language barriers with more to come in the future.