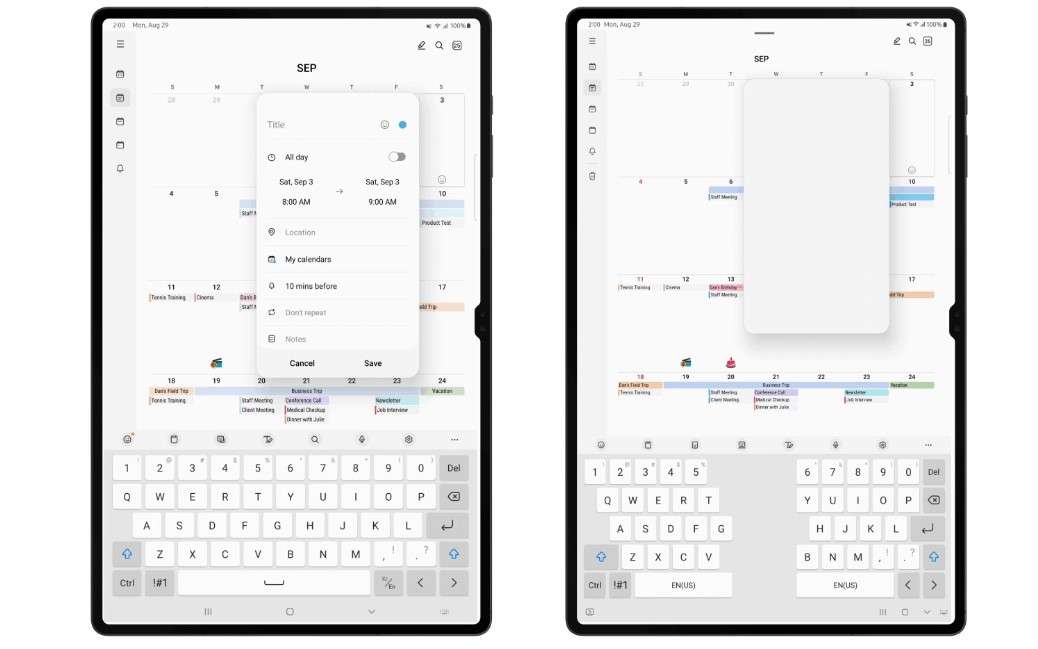 Today Samsung announced a list of improvements coming to their Galaxy Tab S8 series and to other Galaxy tablets related to the update to Android’s 12L on those devices.

A notable change the 12L update will bring to the Galaxy Tab S8 series is the addition of a taskbar at the bottom of the screen, making the tablet’s UI more intuitive and user-friendly than ever before. Going forward, Galaxy Tab S8 series users can enjoy swifter, more intuitive app switching, more customizable layouts, frictionless multitasking and applications that render better than ever on large screens. Split Screen View can support up to three screens, the taskbar can be temporarily hidden for a more immersive screen view, notifications can be dragged straight into split screen and all apps can be viewed in a grid-style layout, to name a few of the changes users can expect.

Multitasking Made Easy Through Taskbar

Need access to articles and videos at the same time? Want to search your photo gallery while keeping one eye on a message thread? 12L makes the Galaxy Tab S8 series’ new and improved taskbar sleeker and more responsive than ever with expanded multitasking capabilities. Customize your taskbar with your favorite apps and tap seamlessly and speedily between active sessions. The taskbar also remembers and displays your two most recently used applications at any given time, so you can always easily pick up where you left off.

Need to view multiple apps at once? Simply drag and drop two or three of your key apps from the taskbar to split the screen and see the app sessions side by side. You can also enter split screen by enabling the ‘Swipe for Split Screen’ option through Galaxy Labs, a feature that lets you swipe from the left, right or bottom of the screen with two fingers to open up a new application in split screen. To get back to the home screen again, just tap the home button in the taskbar.

The Galaxy Tab S8 series has a detailed and spacious display and new updates let users maximize and customize it to the fullest, unlocking their tablet’s full productivity potential.

Whether you want to stay updated on a group chat while planning your route to the meet-up or want to work on your investment portfolio and check stock price changes at the same time, there are now more ways than ever to enter and make use of split screen. When a notification pops up, users can choose to enter full screen straight away or drag the notification next to a currently active app to instantly enter Split Screen View without disrupting what they were already doing.

You can also use your taskbar to save whole groups of activities by saving your favorite App Pair in a folder. If one split screen layout is being used to research a new product you are thinking of buying and another layout is dedicated to planning a holiday, save both layouts to the taskbar as separate App Pairs and jump between them at will.

Split Screen View can take your multitasking to new heights by displaying up to three apps at once, which users can rearrange and resize to best fit whatever tasks they are working on.

Pop-overs are powerful. They let you schedule events, change settings and more, all without switching screens. Sometimes, however, you need a quick look at your Samsung Calendar app when adding an event or a peek at your to-do list when writing a reminder, and pop-overs can sometimes get in the way.

With the latest updates, you can peek right through your pop-overs by touching and holding the screen around them. Doing this will turn pop-overs temporarily transparent so that you can see the rest of the app behind them. They reappear as soon as you lift your finger. Through simple touch and hold, this seamless flow lets you see the big picture when it comes to making new plans and also works with Clock and Reminder apps.

12L expands the list of third-party applications supported on the Galaxy Tab S8 series by enabling all apps to open in a pop-up view or Split Screen View, ensuring that apps are rendered proportionally and optimally on a larger screen.4

Adding to pre-existing optimized apps, like Samsung Notes and Google Meet, 12L introduces a wider range of third-party apps that are also designed to scale and adapt to a larger screen. In the months following the 12L update, users will continue to see even more third-party apps optimized for larger-window experiences. Whether on their own or viewed in Split Screen View, this new UI ensures your apps give you maximum productivity power and make the most of every inch of the Galaxy Tab S8 series’ generous display.

The update should be rolling out to the Samsung Galaxy Tab S8 series and to other Galaxy tablets soon.