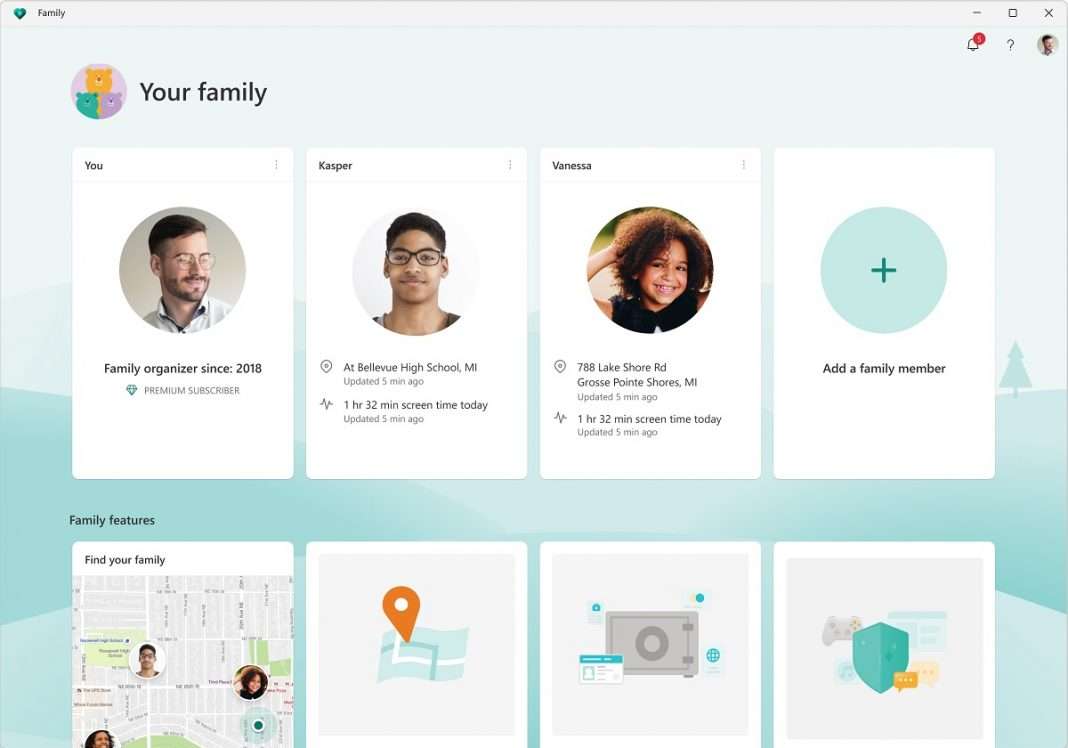 Besides the usual bug fixes and improvements, the update brings two new apps to the standard Windows 11 installation – Microsoft Family and Clipchamp as inbox apps – see details for these two apps below.

Starting early next week, Microsoft will also start rolling out an update for Search in Windows 11 called search highlights that will highlight interesting moments in time from the world around you and in your organization.

Windows Insiders can also try out the new Microsoft Defender preview (English and U.S. only for the preview).

The family safety features you use on web and mobile are now available on Windows 11 starting with this build with the Microsoft Family app. Set parental controls to filter inappropriate apps and games and set browsing to kid-friendly websites for Microsoft Edge. Help your kids balance their screen time activity on Windows, Xbox, and Android and use activity reporting to better understand your family’s digital activity. Stay connected even when you’re apart with family location tracking.

Clipchamp is now an inbox app:

Clipchamp is our new video editor focused on making video creation easy, fast, and fun. Clipchamp is equipped with all the basic tools you’d expect, like trimming and splitting, as well as more pro-style features like transitions and animated text. For real-time content capture, there are also built-in webcam and screen recorders.

But what really sets Clipchamp apart from other video editors is its timeline. Normally, this is an interface reserved for pros because it offers more control (and complication) than the everyday editor can handle. When it comes to Clipchamp, however, things are different. Microsoft kept all the best parts of timeline editing — the flexibility, the ability to fine tune details — and done away with the rest. The result is a refreshingly simple video editing experience anyone can enjoy.

The highlights don’t stop there — in Clipchamp, users will discover more unique offerings, like a stock library filled with more than a million royalty-free videos, audio tracks, and images that can be added to videos. There’s even an Azure-powered text-to-speech generator capable of creating voice overs in more than 70 languages. And, speaking of Microsoft integrations, Clipchamp also connects with OneDrive, meaning you can import files and save videos quickly and securely.

To start creating your own videos, look for Clipchamp in the Start menu on your PC.

Starting early next week, Microsoft will begin rolling out an update for Search in Windows 11 that highlights interesting moments in time. Search is right there on your taskbar—your window to discover what’s trending online, in the world, and in your organization. Of course, you can still type to start searching for your apps, files, settings, and quick answers on the web.

The search box in Start and Search will periodically update with content, including fun illustrations, that help you discover more, be connected, and stay productive. These hints in the search box give you a sneak peek into what to expect in search home.

Search highlights will present notable and interesting moments—like holidays, anniversaries, and other educational moments in time both globally and in your region. You’ll find rich, bold content in search home that highlights what’s special about today.

To dig deeper, you can explore additional content in search home related to today’s moment and daily content like word of the day, Microsoft Rewards offers, trending searches, and more. Each day features something different to learn about! The left side of search home also shows an extended list of your recently launched apps, files, settings, and websites to help you get back to what you were doing last.

Signing in with your work or school account enables Search to be your one-stop-shop for your organization’s files and contacts through Microsoft Search. Search highlights will feature the latest updates from your organization and suggested people, files, and more. Explore files that may be of interest to you or browse through your organization’s people chart. As always, just start typing to find everything related to your organization, right at your fingertips using Search.

You have control over the search highlights experience where if you prefer not to see this, you can turn it off or back on in Settings > Privacy & security > Search settings and toggling “Show search highlights”. For organization administrators, there are additional controls available in the M365 admin center. You can learn more about those policies here: Policy CSP – Search.

Search highlights is also coming to the Windows 10 search box where you’ll be able to get the same updates in the search box and search home. Stay tuned for more information in an upcoming blog post when Microsoft begin trying out this experience with Insiders on Windows 10 in the Release Preview Channel.

This feature will begin rolling out early next week and won’t be available to all Insiders right away as Microsoft plan to monitor feedback and see how it lands before pushing it out to everyone.

NOTE: These fixes will only show if tablet-optimized taskbar is enabled on your device, which is beginning to roll out to Windows Insiders and not yet available for everyone.

NOTE: Some fixes noted here in Insider Preview builds from the active development branch may make their way into the servicing updates for the released version of Windows 11 that became generally available on October 5th, 2021.

Microsoft Defender is now in preview (U.S. only)

Microsoft warns that the Dev Channel receives builds that represent long lead work from their engineers with features and experiences that may never get released as they try out different concepts and get feedback. It is important to remember that the builds released to the Dev Channel should not be seen as matched to any specific release of Windows and the features included may change over time, be removed, or replaced in Insider builds or may never be released beyond Windows Insiders to general customers.

Spotify launches audiobooks in the US with 300,000 titles