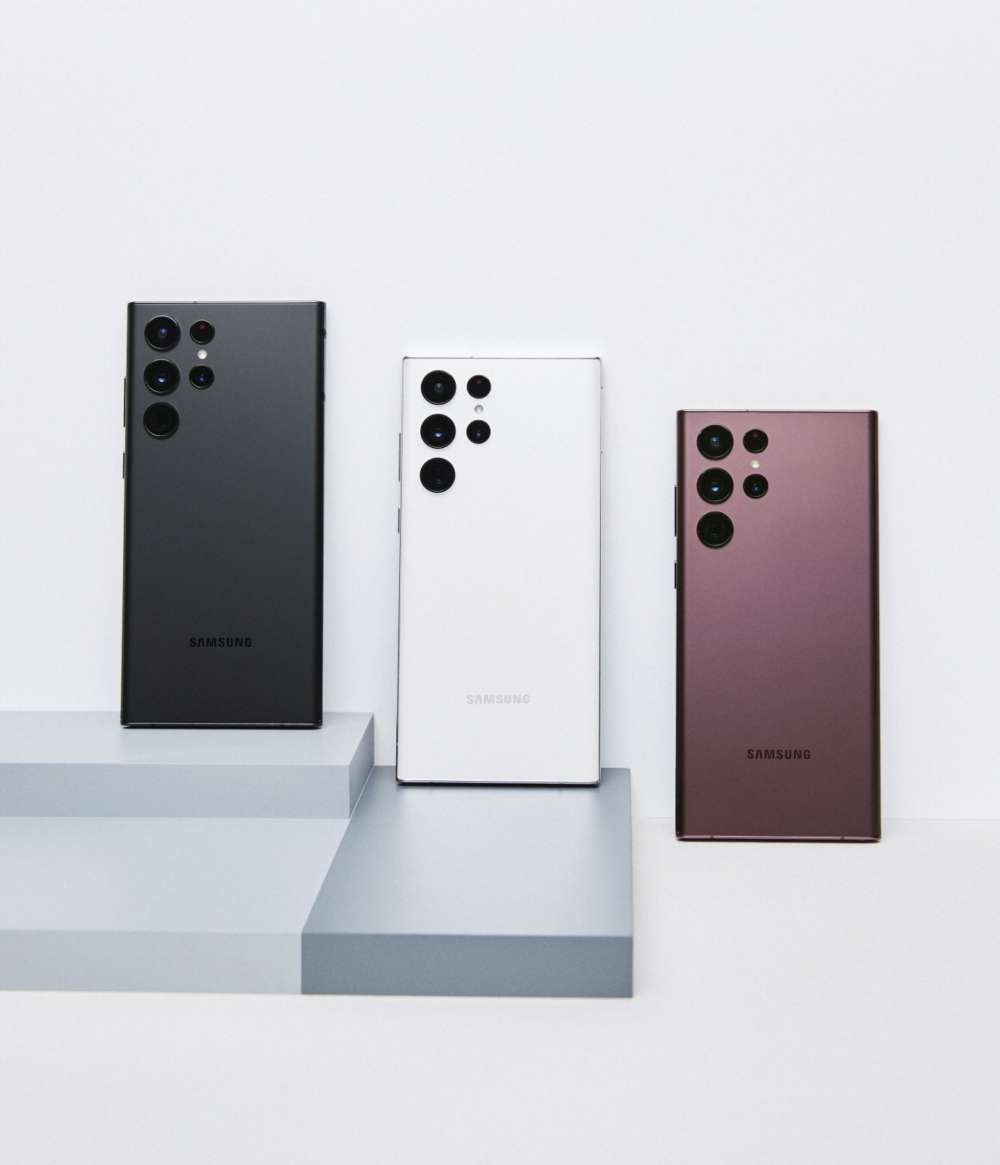 Samsung Electronics today unveiled the Galaxy S22 and S22+, flagship devices that introduce dynamic cameras with advanced intelligent image processing and the Galaxy S22 Ultra, which merging the best of two smartphone legacies — the unrivaled power of the Note series and the pro-grade camera and performance of the S series.

The Galaxy S22 and S22+ are designed to deliver next-level camera experiences, so people can connect and share wherever they are. With the Galaxy S22 series’ revolutionary new Nightography features — like the 23% larger sensor than S21 and S21+ and Adaptive Pixel technology — your camera is designed to let in more light, draw out details, and capture colours that make your content pop, even in the dark. Both Galaxy S22 and S22+ are built with a powerful 50MP main camera, 10MP tele-lens, and 12MP ultra-wide lens, so you always get high-quality shots. When you’re capturing videos with friends, the new Auto Framing2 feature detects and tracks up to 10 people and automatically adjusts the camera’s focus, so your camera captures everyone clearly. Both devices are powered by advanced VDIS technology which minimizes vibrations, so you get smooth, sharp footage even when you’re on the move.

Galaxy S22 and S22+ are also equipped with Samsung’s latest AI technology that takes your photos to the next level. It’s easy to take perfect Portrait mode photos with the new AI Stereo Depth Map, and your subjects will look better than ever with even the smallest details appearing crisp and clear thanks to a sophisticated AI algorithm. The same works for your favorite furry friend: Galaxy S22/S22+’s new Portrait mode helps prevent pet hair from blending into the background, so you always get the best shot of your pet.

“Our smartphone cameras have transformed the way we create, share and communicate. Through photos and videos, we express ourselves and connect with the people we care about,” said TM Roh, President and Head of Samsung Electronics’ MX (Mobile eXperience) Business. “That’s why we focused on designing our latest S series devices with groundbreaking camera capabilities that work day and night, powered by our best mobile performance yet.”

From work to home, Galaxy S22 and S22+ are designed to power you through even the busiest days with the first-ever 4nm processor on a Galaxy smartphone. It powers their most advanced AI and ML processing to date, delivering unrivaled performance for all your streaming and productivity needs. What’s more, network behavior analysis streamlines your app performance by automatically detecting which app you’re using and directing the most power there — so streaming, surfing the web, and navigating apps have never been smoother.

The Galaxy S22 is built with a robust all-day battery and 25W fast charging while the Galaxy S22+ also offers 45W super-fast charging, so you don’t have to wait when your power is running low.

Both devices come equipped with a Dynamic AMOLED 2X display, designed for the best in gaming and watching. The Galaxy S22 offers a 6.1-inch display and the Galaxy S22+ a 6.6-inch, and offers intelligent Vision Booster technology that automatically adjusts the display to the lighting around you and enhances the colour contrast, so you can enjoy the best possible view of your content. The S22 also offers peak brightness of 1,300nits while S22+ features a peak of 1,750nits.

Through Samsung’s partnership with Google, you can enjoy Google Duo live sharing to view photos in Gallery with friends or write meeting notes with colleagues on Samsung Notes — even while you’re apart.

Both Galaxy S22 and S22+ feature the S series’ iconic, Contour-Cut design that blends the camera seamlessly into the housing. To create a sleeker and more refined look, Samsung built both devices with a distinctive flat display, complete with a luxurious glass and haze finish. The S series camera housing is designed to match the colour of the device’s body with a slim and symmetric metal frame for a seamless look. Both the Samsung Galaxy S22 and S22+ are available in Phantom Black, Phantom White, Green and Pink Gold.

The Galaxy S22 Series are Samsung’s most durable mobile devices yet. Galaxy S22 and S22+ are the first S series models made with Armor Aluminum — their strongest aluminum frame, so you can take your phone anywhere with peace of mind. The Galaxy S22 series is also the first smartphones to feature new Corning® Gorilla® Glass Victus®+. The S22 series devices are equipped with this tough glass on the front and back, so you can worry less about accidental drops.

Samsung also promises to make your device last by offering the entire Galaxy S22 series will be supported by up to four generations of Android OS upgrades.

“At Samsung, we constantly push ourselves to raise the bar on our most premium devices,” said TM Roh, President and Head of Samsung Electronics’ MX (Mobile eXperience) Business. “Galaxy S22 Ultra takes the beloved functionality of the Galaxy Note and the most celebrated aspects of the S series and merges them for a truly unique mobile experience. This is a leap forward for mobile technology, setting a new standard for what a smartphone can be.”

The Galaxy S22 Ultra brings everything you love about the Note experience — including its signature S Pen — to the S series. Galaxy S22 Ultra joins the new Galaxy S series of devices — Galaxy S22 and S22+ — offering every feature of those devices plus new added features for the best of the S and Note series.

The new S Pen is Samsung’s fastest, most responsive S Pen with 70% lower latency meaning you can write and draw more naturally on your S22 Ultra’s expansive screen, and explore apps in new ways.

With Galaxy S22 Ultra includes Advanced Nightography features available on the entire S22 family of devices allow you to snap crisp, clear videos on both the front and back cameras, whether you’re recording during the day or night. S22 Ultra is built with a 2.4um pixel sensor — Samsung’s largest pixel sensor ever, enabling its camera lenses to capture more light and data, optimizing the lighting and detail of your video clips. Plus, S22 Ultra’s advanced Super Clear Glass lens helps you take smoother and clearer nighttime videos without flares. Meanwhile, video Auto Framing ensures your camera always captures exactly who you want, whether that’s one person or ten.5

With zooming capabilities that will get you 100x closer to the action, Galaxy S22 Ultra isn’t just Samsung’s most powerful camera, it’s also the smartest. Packed with new AI supported features like Portrait mode, Galaxy S22 Ultra is built to make every photo look professional.

Whether you’re an amateur or a professional photographer, Galaxy S22 Ultra gives you all the tools you need to snap a beautiful shot every time. Like Galaxy S22 and S22+, Galaxy S22 Ultra offers exclusive access to the Expert RAW app, which features a comprehensive suite of in-camera editing tools that deliver a DSLR-like experience and let you enjoy more creative control. With the ability to save photos in RAW format up to 16bit, you can take more control over your edits with more of your images’ data. And just like a DSLR camera, you can brighten or darken your photos with ISO settings and shutter speed, adjust white balance to make your photo more warm or cool, and manually focus on your desired subject to get your images looking exactly the way you want.

The S22 Ultra is part of the first Galaxy S series to be equipped with the latest 4nm processor, which powers Samsung’s most advanced AI and ML processing. It also features Wi-Fi 6E, up to twice as fast as Wi-Fi 6. That means you can enjoy unrivaled performance on all your most-used apps, whether you’re gaming, streaming, or working. All that power runs on Galaxy S22 Ultra’s powerful battery, which gives you more than a full day of use in a single full charge. S22 Ultra also supports 45W super-fast charging, so you can record more than 50 minutes of video — after a 10-minute charge.

The Galaxy S22 Ultra’s immersive 6.8-inch,12 Dynamic AMOLED 2X display brings everything to life in stunning detail and brighter than ever with a peak brightness of 1,750 nits. Plus, Vision Booster technology enables Galaxy S22 Ultra’s screen to intelligently adjust brightness throughout the day, making sure you get the best possible view of your content even in bright sunlight.

The entire Galaxy S22 series will be supported by up to four generations of Android OS upgrades.

Plus, the Galaxy S22 series brings you Samsung Wallet — a seamless, convenient and secure experience to make everyday life easier. Samsung Wallet combines digital payment, ID, keys and asset management into one tool to simplify your routines, from showing your student ID to compiling travel documents before a flight.

Starting on February 25, 2022, Galaxy S22, Galaxy S22+ and S22 Ultra will be widely available in carrier and Unlocked by Samsung versions through Samsung.com, carriers and retailers online. Both devices will be available in the following colors and memory options: