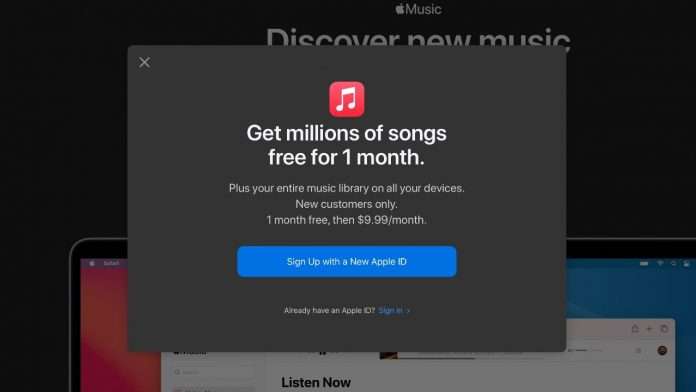 Spotify has been having a spot of bother with its users, with many users can cancelling their subscriptions due to their sponsorship of the Joe Rogan show, which has been accused of advocating anti-vaccine sentiment.

Many of those users have transitioned to Apple Music, but it appears that instead of welcoming them Apple has raised the bar of entry by reducing its free trial period from 3 months to only 1 month.

New users looking to switch to Apple Music will now see the above banner offering only 30 days of free streaming music.

The number matches the length of the free trial offered by Spotify, but contrasts badly with Amazon Music, which offers a full 4 months of free testing.

According to a report from Midia Research, Spotify is the largest streaming music service with 31 percent market share, followed by Apple Music at 15 percent, and Amazon Music and Tencent Music each tied at third with 13 percent apiece.

Apple Music’s move to reduce their free trial period suggests the company is feeling little pressure to take advantage of Spotify’s stumble and close the gap in the near future.